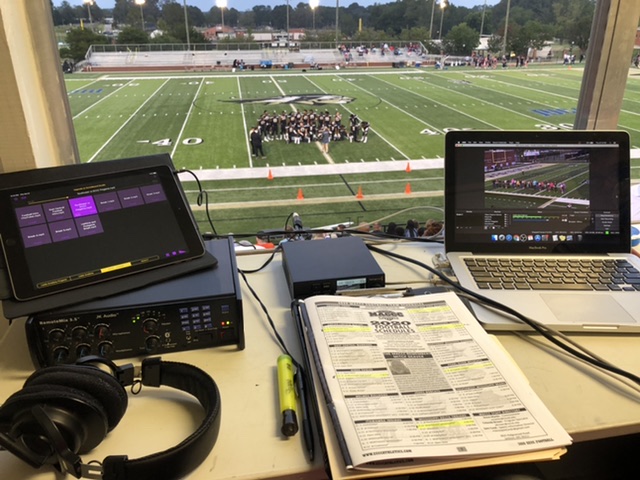 Even though my team was off for two weeks due to COVID-19 protocols, I was able to get back to the booth this past week.

With all the high school games moved up to Thursday night because of Hurricane Delta, I was called in to help with our East Central Community College broadcast.

But this time, I would instead be in charge of producing our video stream and occasionally providing color commentary.

It was a nice change of pace for me since I’m usually studying film and memorizing rosters, but this time I was creating pregame and halftime graphics and figuring out a way to get a scoreboard on screen.

Things went very well once we finally got on the air. YouTube decided it wanted to completely redo the way you have to set up video streams, so I had to fix that on the fly and get a new code/link back to our producer in the studio, but it’s nothing that I couldn’t handle.

I quite enjoyed doing a little something different, because I like to get experience in all aspects of a broadcast.

However, I will be glad to return to play-by-play this week….hopefully.

A main storyline in Marvel’s Captain America and Avengers movies is that he just doesn’t know how to stop being a soldier.

Several times throughout the movies, it’s referenced that despite his insistency that he wants peace, he just can’t step away from conflict .

Avengers: Age of Ultron
“Captain America…God’s righteous man…pretending you could live without a war.” -Ultron

In one particular scene, an enemy gives the Avengers a vision all of each of their greatest fears.

In Captain America’s vision, his greatest fear is the end of the war. Steve finds himself in the 1940s with his girlfriend at a party to celebrate the end of WWII.

“The war’s over Steve. We can go home.” -Agent Peggy Carter

I feel like Captain America this week. Now I’m no hero and I’m certainly not comparing myself to a soldier. I just mean that it’s hard for me to “turn it off.”

Someone asked me today why I work so much. It’s an honest question.

The simple answer would be that I enjoy what I do, so it doesn’t always feel like work. That doesn’t mean it’s not difficult or at times I don’t get burnt out because I do.

It’s the old adage that “if you want something done right, do it yourself.”

This week I find myself in a rare situation: I don’t have football games to prepare for or broadcast for 2 weeks. The team’s games have been cancelled due to rising cases of coronavirus.

This will be the first time I’ve had 2 Friday nights off in October since 2012.

Now, you would think it would be easy for me to take a step back and enjoy some much needed time off on a Friday night. However, the truth is, I’ve been looking for a game to work.

I’ve talked to a few of my broadcasting friends to see if they need an extra analyst, sideline reporter, or something.

Of course, none of them have any openings.

But, as luck would have it, today I learned that our other football broadcast is in need of a camera operator. Now, I still haven’t decided if I’m going to run the camera or not, but at least the option is there.

I have a ton of other work to do this week as well, so maybe I will take Friday night off.

After all, The Empire Strikes Back is showing in theaters this weekend to celebrate its 40th anniversary.

And if there’s anything that could make me take off of work, it’s Star Wars. 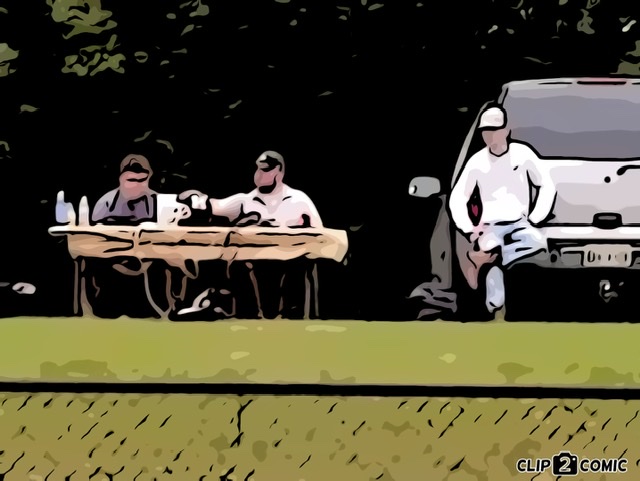 In my 8 seasons of broadcasting football, I’ve never quite had an experience like we had Friday night.

We went on the road to Holly Springs. A 2 hour and 15 minute drive for us.
This would be the first home game of the season for Holly Springs. Because of a ruling by their mayor, the team was not allowed to play any home games this season. However, during a recent city meeting, aldermen overturned the mayor’s ruling and allowed the team to play.

So, this was already going to be a crazy game even before Friday ever got here.
But, I enjoy a good road trip to a broadcast, because windshield time with our crew is always entertaining.

Now the facility at Holly Springs isn’t the best when it comes to accommodating visiting broadcasters. It’s at a city park and there just isn’t any room for more than a handful of people in the press box.

Well, while doing my research,  I saw the visitor’s side had a parking lot that was on a hill overlooking the field. I decided that would be the best place for us to set up because we’d have a decent view and could spread out.

But also, if you know me, you know I have to add a little flash to most things I do. And if I was going to broadcast from a parking lot, we were going to turn it into a tailgate party.

So in addition to our broadcast equipment, we brought snacks (homemade Chex mix and boiled peanuts courtesy of Momma Riley), a cooler full of drinks, some decor for our table (helmet and burlap), and a generator.

We are the first people at the stadium (something I like to pride myself on), and we notice that the set up was a bit worst than we thought, but not for us.
Our spot was just as I had scouted. However, the field is in very bad condition.

And by very bad condition, I mean it was FULL of ant beds.

Remember, this is the first game Holly Springs has hosted this season. So ants had taken the field as their’s during the off season. Someone attempted to put some poison on each ant bed, but it looks like that was done about 2 hours before we got there.

Luckily, we never saw any players have a run in with the ants.

So yes, broadcasting from a parking lot…for a game that was on a field full of ants….while have to use a cell phone flash light to read our stats and rosters….is a night that will be hard for the remainder of my broadcast career to top. 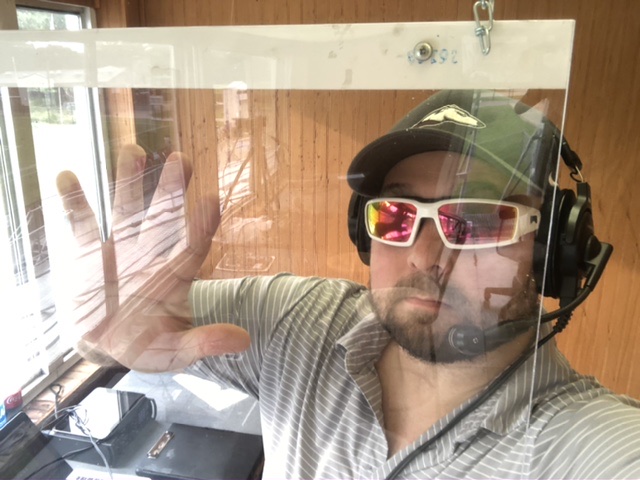 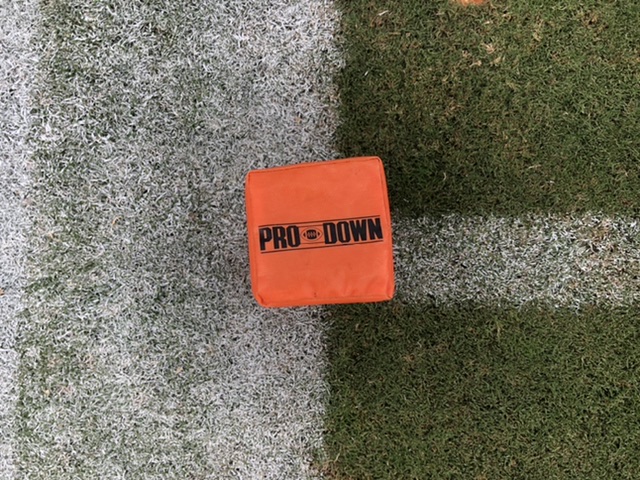 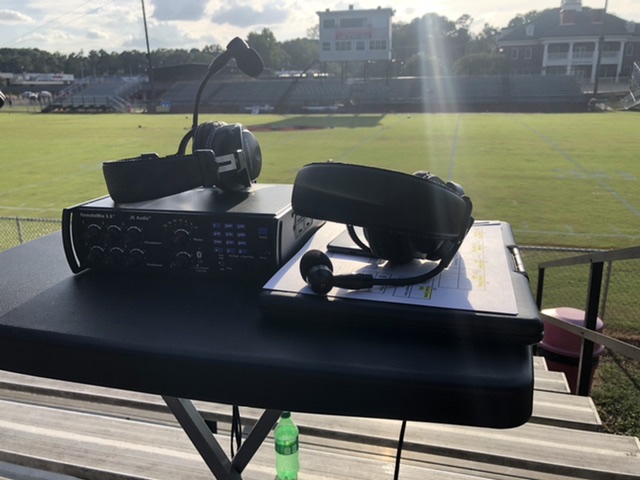 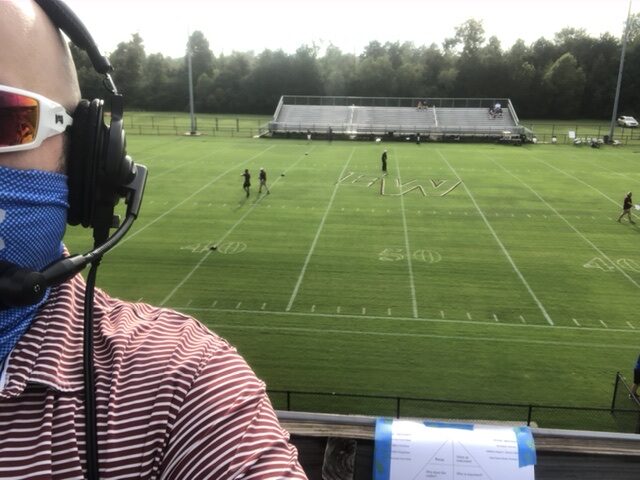 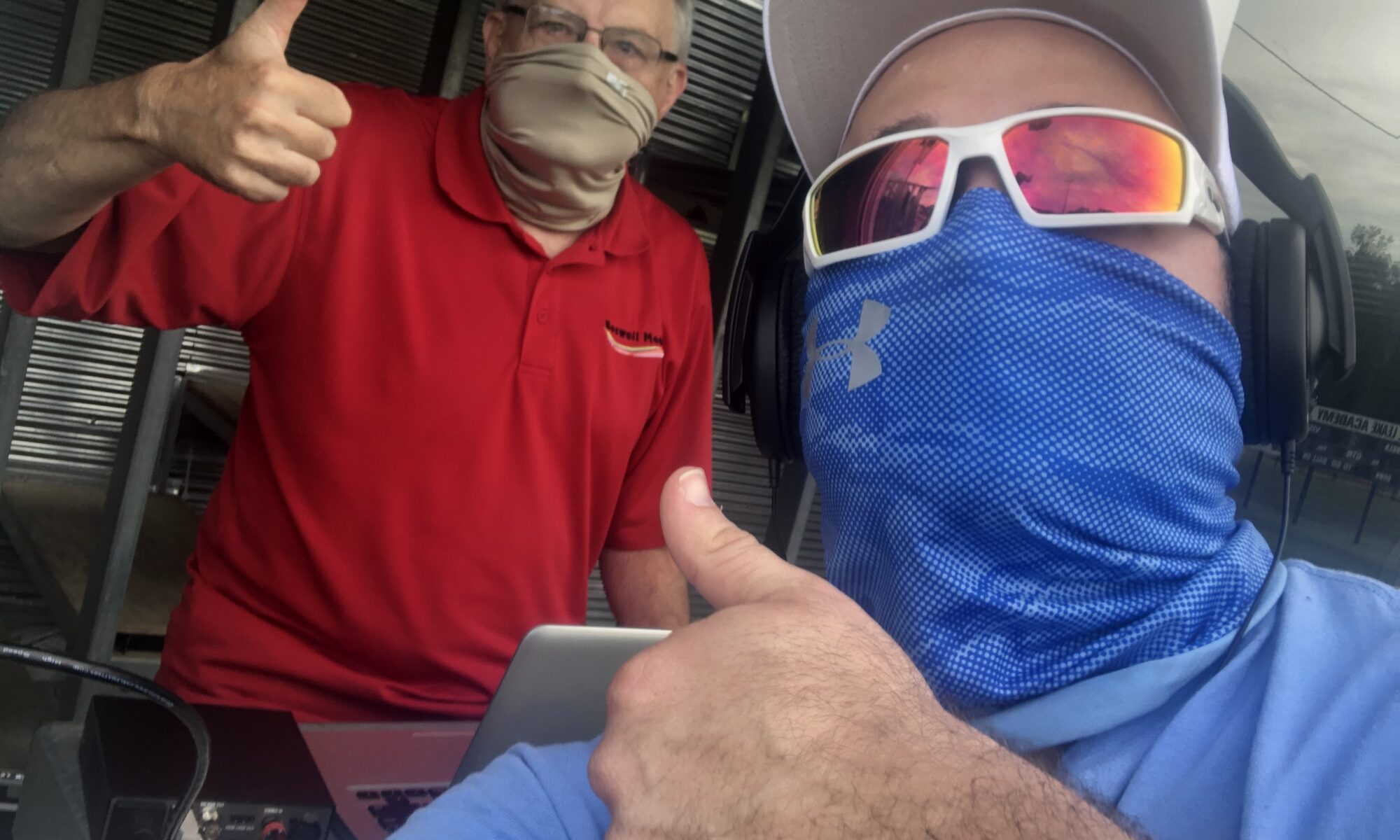 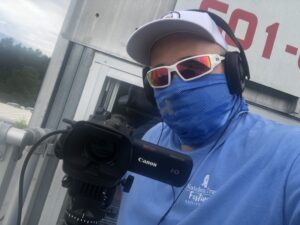 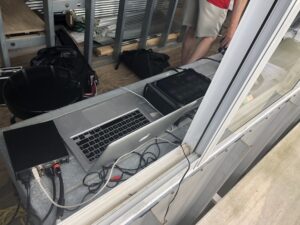 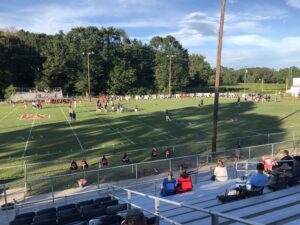 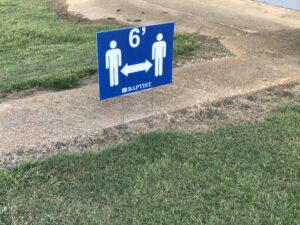 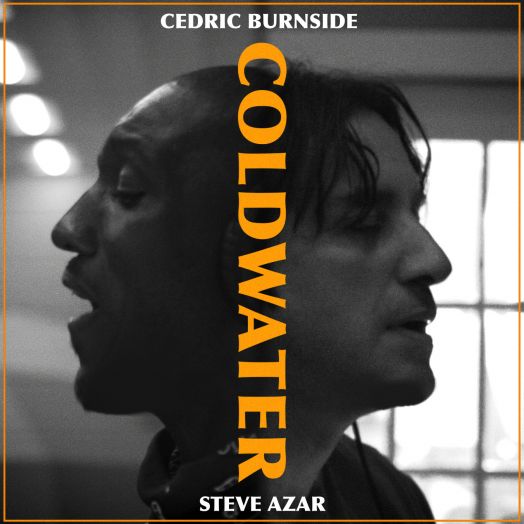