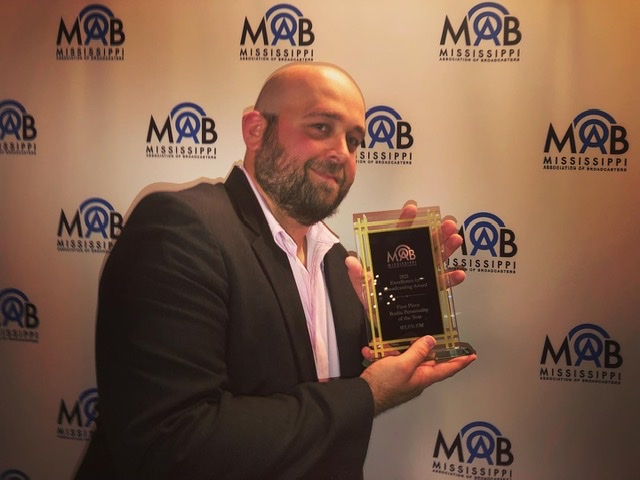 Well, now that it’s had a little time to sink in, I figured I’d try to put into words what it means to me to be named Radio Personality of the Year by the Mississippi Association of Broadcasters.

You may have seen me post or have heard me mention how this was a big one for me. And about how this is the award I’ve wanted since I got into radio.

Now don’t get me wrong, I was honored to be the Associated Press Radio Newsperson of the Year for 2016 and also the AP’s Best Radio Reporter in Mississippi/Louisiana for 2017, 2018, and 2019.

Those awards are all special to me as well, but this one was different.

The reason for that I guess is the term personality.

To me , Radio Personality of the Year encompasses more than just being the person that makes corny dad jokes on the radio every morning.

For me, radio personality is being the person that embodies the radio station and the community that he/she represents.

He or she is the one that is out there in the community, speaking to clubs, dressing like an idiot to go read to students during Dr. Seuss week, students,  putting on a Halloween costume and doing a Facebook live broadcast around the square trick-or treating, or broadcasting in a straight jacket from an abandoned jail while helping raise money for the Make-a-Wish Foundation.

My response was that there may be others around the state who are better on-air than me or those that have more radio and music knowledge than me.

But when it comes to being a “radio personality,” I don’t think there is anyone in the state that does it quite like I do.

And I am grateful to that the Mississippi Association of Broadcasters thought so as well.

Below is the audio reel that won me the Radio Personality of the Year award.