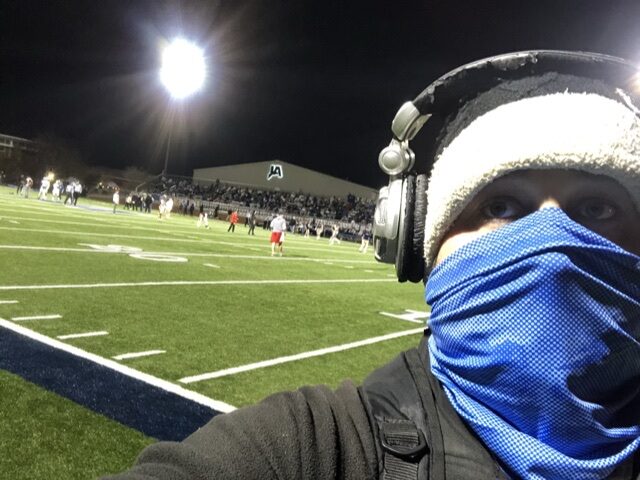 Those were all great experiences, but being on a football state championship broadcast had eluded me.

That was until this Friday night.

Leake Academy was playing for its first state title and undefeated season. I was just planning on going to document and take pictures and video for our website and maybe grab some audio from the coach for the news.

Well, we eventually decided that we wanted an on-air interview with the head coach if they ended up winning the game.

So, I dug a wireless mic out of my closet that I’d wanted to try for a while, got it to work, and decided I’d give it a go as a sideline reporter.

Sideline reporting is a lot different than play-by-play. Being right there on top of the action is exciting. You do have to dodge errant passes and try not to get ran over during plays that carry out of bounds.

It’s also quite difficult to hear the broadcast when you’re standing in front of a sold out crowd. It might as well have been a home game for Leake so there were several times when I couldn’t hear the commentary team.

But being on the field….when a team finally captures the school’s first championship….is truly an experience. Hearing the coaches thank each other and be right next to players that are getting emotional as they run onto the field.

I doubt I’ll ever give up play-by-play for sideline reporting, but this was definitely something I’ll never forget.